With students facing more pandemic-related pressures than ever and those stressors causing some students to act out in self-harm or harm to others, there’s never been a more critical time for schools to take a proactive approach to safety and get troubled students the help they desperately need. One of the best ways schools can achieve this is by implementing a successful behavioral threat assessment (BTA) program. See how Aubrey ISD in Aubrey, TX successfully incorporated BTA to enhance their culture of safety. 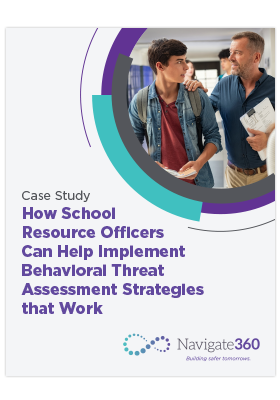 Why SROs Play an Important Role in Schools

Executive Director for the National Association of School Resource Offices (NASRO) Mo Canaday views the role of SROs as a way to bridge the gap between students and law enforcement. Canaday emphasizes the importance of SROs forming strong relationships with students, staff and parents.

“It still goes back to that foundation of the relationship,” Canaday says. “When we’re in a good relationship with students, faculty and parents, we’re able to better see when a student is veering off of the path.”

“[An SRO’s role on the BTA team] is being a part of the educational process, being an informal counselor, and a law enforcer,” Canaday says.

Most issues do not need to end in arrest, Canaday says. Instead, every situation should be evaluated holistically, as various factors may play a role in a student’s behavior. Perhaps the student is dealing with issues at home or is the victim of bullying at school. SROs should consider an approach that will not only de-escalate the student’s behavior but also provide them with the support and resources they need to move on to a safer, more successful path. To hear more on why SROs play an important role in schools, view this on-demand webinar.

With students facing more pandemic-related pressures than ever and those stressors causing some students to act out in self-harm or harm to others, there’s never been a more critical time for schools to take a proactive approach to safety and get troubled students the help they desperately need.

One of the best ways educators can achieve this is by implementing a successful behavioral threat assessment (BTA) program. A BTA functions as a tool for preventing violence by helping students in crisis get the support they need before their behavior escalates. Here we discuss how school resource officers (SROs) fit into the BTA process and how one school district successfully incorporated BTA to enhance their culture of safety.

The Impact of an On-Campus SRO for School Safety

SROs play a key role in preventing school violence, using the relationships they’ve developed within the community and among the student body to identify concerning behaviors proactively.

Having an encouraging rapport between the SRO and students establishes trust, which helps students feel more comfortable reporting a problem. With that being said, the overall safety of a school does not rest solely on the shoulders of the SRO. It’s crucial that SROs, teachers, administrators and psychologists work together to ensure that multiple perspectives and resources are considered when addressing concerning student behavior.

As Chief of Police and Emergency Manager of Aubrey Independent School District (ISD) in Aubrey, Texas, Scott Collins says the role of SROs in Texas evolved after the introduction of Senate Bill 11, a school safety act funded by the state’s legislative session.

Once the bill was put in place, he says Aubrey ISD formed a multi-disciplinary team of professionals – a key member being the SRO – to conduct behavioral threat assessments. “We had a licensed school psychologist, we had district administration, a school counselor, and then two outside team members that were educators within the district. And we started building the team,” he explains.

Thanks to the resources and perspectives his team provided, they learned of a student who was sharing suicidal ideations on social media. With this information, Collins intervened, visited the student’s home and spoke to the parents.

“If you have a case six months down the road with John Doe student, you can look at the case notes and see if this is a behavior [or] if this is part of his disability,” Collins says. “[It helps to discern] what might be linked to this [behavior].”

Navigate360’s Behavioral Threat & Suicide Case Management platform is a comprehensive documentation tool that streamlines the collaboration of school staff with other team members and outside agencies. Collins says his team initially kept notes within a Google doc, but that became cluttered as more and more documents were added.

When writing out BTAs, Collins says personal connections to students can impede an objective evaluation. With Navigate360’s Behavioral Threat & Suicide Case Management in place, emotion is taken out of the equation. This reduces bias and ensures a consistent behavioral threat assessment process across teams.

BTAs are an invaluable tool for determining when a student is in trouble, resulting in a safer – and more aware – school community. To learn about how Navigate360 can help protect students and support SROs and other school leaders in your district with violence prevention solutions that work, contact us today.

Proactively address concerning student behaviors while providing crucial support to those in crisis.

Identify, assess & manage students who pose a threat of harm.

Actionable insights to help prevent violence on your campus.