Download this guide to learn how you can address youth mental health issues on your campus by investing in proven threat detection and prevention solutions and students’ mental wellbeing. 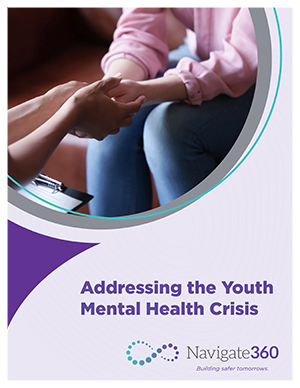 The COVID-19 pandemic has reshaped society as we know it. Besides the obvious physical effects of the virus — and the measures being put in place to protect people and limit its spread — the pandemic is also taking a toll on the mental health of people everywhere, especially kids. With sweeping changes made to their education, socialization and home lives, children are struggling with stressors they’ve never faced, and they’re feeling new levels of anxiety and depression as a result. In short, the pandemic has contributed to the creation of a true mental health crisis for students in this nation.

In December 2021, the U.S. Surgeon General released a public health advisory containing findings related to the mental health of young people before and during the pandemic. According to the advisory, there was a 40% increase in “persistent feelings of sadness or hopelessness” among youth from 2009 to 2019. It also states that in 2016, roughly half of the 7.7 million children with treatable mental health disorders “did not receive adequate treatment.”

The “unfathomable number of deaths, pervasive sense of fear, economic instability, and forced physical distancing from loved ones, friends, and communities” brought on by the pandemic have made teens’ mental health struggles of the past decade even worse, according to the advisory. Since the start of the pandemic, 25% of youth surveyed experienced depressive symptoms and 20% reported feeling anxious — in both cases, more than double the pre-pandemic rate.

Download this guide to learn how you can address youth mental health issues on your campus by investing in proven threat detection and prevention solutions and students’ mental wellbeing.

The youth mental health crisis is also being recognized as a national emergency. In October 2021, the American Academy of Pediatrics (AAP), American Academy of Child and Adolescent Psychiatry (AACAP) and the Children’s Hospital Association (CHA) declared a national emergency in children’s mental health, stating that the pandemic “has intensified this crisis: Across the country we have witnessed dramatic increases in Emergency Department visits for all mental health emergencies including suspected suicide attempts.”

With a global pandemic making life even more challenging for an age group that was already experiencing rising mental health issues, it is imperative that schools understand what is happening and make plans to address the crisis on their own campuses.

Besides the pandemic’s complete overhaul of modern life and disruption to routines, youth face other challenges to their mental health and wellness on a daily basis.

High expectations from both parents and schools can take a toll on students’ mental health as they try to keep up with what’s demanded of them. The pressure to maintain high grades often comes from an instilled fear of not getting into a good college, failing classes or living up to the expectations of a parent or teacher. This can impact a student’s mental health as they sacrifice their sleep, diets, social lives and schedules to make it all work.

On the other hand, schools and classrooms that do not set expectations for students can leave students unprepared for the future. This can also cause stress once a student is faced with a challenge they aren’t prepared for.

According to a 2021 poll by Navigate360 and John Zogby Strategies, many school-aged children simply don’t feel that safety is a true priority at their schools. Here are more sobering figures from this poll:

Today’s youth (largely Generations Z and Alpha) didn’t just learn to adapt to an increasingly online world — they grew up in it and have been raised largely by the Internet. While this has given them plenty of resources for education, entertainment and social interaction, it has also created an avenue for bullying and harmful content that is negatively affecting their mental wellbeing. A 2018 study conducted by Pew Research Center found that 59% of teens have experienced at least one of six types of cyberbullying: 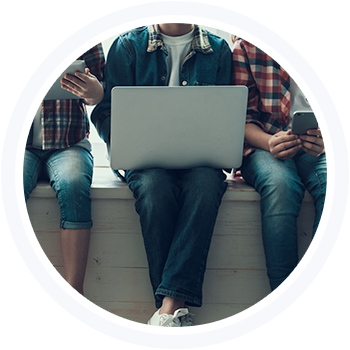 Even though our youth has an incredibly deep understanding of modern technology and the way the Internet works, students and school staff have had to adapt to remote learning forced upon them by the pandemic. The complete disruption to the in-person, interactive, collaborative learning style many were used to receiving has given many students trouble as their schools work to piece together a brand-new education style with no roadmap or precedent to refer to.

Youth who have turbulent home lives that include physical and/or emotional abuse, food or housing insecurity or community areas prone to violence are constantly dealing with stress and anxiety. COVID-19 has only made things worse by adding more stressors to these students’ already full plates.

What Can Schools Do to Address Youth Mental Health & Students’ Perception of Safety?

Concerningly, students today are lacking confidence in their safety at school. According to a December 2021 Zogby/Navigate360 poll:

Creating a positive, safe school climate is key for schools to properly meet their students’ mental health and wellbeing needs. Schools must be well-equipped to achieve positive outcomes amidst the youth mental health crisis and quite possibly save lives by getting kids access to the invaluable resources they need. When school staff members know when and how to get help for their students, it’s much easier for students to feel confident in their physical, social and emotional safety.

Of course, it can be difficult for even the most experienced school staff to know where to begin. Navigate360 is here to help. Our complementary and integrated safety solutions can help schools handle the youth mental health crisis on their own grounds and effectively support students in need.

While the sheer volume of information on the Internet and in digital spaces can be overwhelming, there are modern options for managing threats to students online. The good news for schools is that online communication provides information that might otherwise have gone unnoticed. This information, known as “leakage,” is warning behavior that may signal the signs of troubling future behavior, including researching, planning and implementing an act of violence or harm.

In days past, many types of leakage would be completely invisible. These include conversations in the schoolyard or anonymous phone calls that can’t be monitored or traced. Thankfully, digital leakage is much more detectable and can be harnessed to help schools identify concerning behaviors before they escalate. To do this, schools need the core components listed below.

Serving more than 30,000 U.S. schools, Navigate360 School Tipline empowers students, teachers and individuals in the community to proactively share information about safety, bullying, self-harm and violence. The anonymous tip reporting tool also serves as a forum for collaboration and accountability between school administrators, peace officers and mental health professionals to ensure every student’s needs are met. Piecing together clues that indicate troubling patterns in students’ behavior can be a monumental – or impossible – task for busy educators and administrators. Records are often incomplete or separated between various departments and because the vast digital landscape cannot be scanned manually, it’s difficult to pinpoint all warning signs in students. Navigate360 Detect digital scanning offers a solution to these problems by harnessing the power of artificial intelligence and machine learning.

Navigate360 Detect is software that digitally scans public and school-owned media for leakage (warnings that may signal the research, planning and implementation of an act of violence or harm) and troubling behavior among students. Our software searches among 25 subtopics including suicide, violence, mental health, bullying, racial harassment and food insecurity.

Students today have nearly unlimited access to the wealth of information online. While this access provides unprecedented learning opportunities, it has its risks. Children face radicalization, exposure to harmful and inappropriate content, and cyberbullying online, leading to real-world consequences. 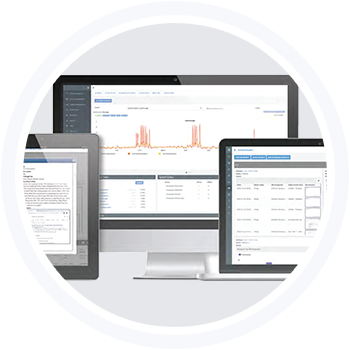 How to Manage & Mitigate Concerning Behaviors

When students exhibit warning signs such as changing their demeanor, making concerning comments (online or in-person) or being absent more frequently, the default action should be to address what’s causing these behaviors. By identifying, assessing and responding to mental health concerns in students such as potential threats of harm to self or others, school leaders can reduce the risk for violence throughout their schools and help students feel safe and thrive academically, socially and emotionally.

To ensure nothing slips through the cracks, schools need thorough and interconnected processes to both identify patterns and act on warning signs before they turn into tragedies. Unfortunately, many schools still rely on tedious paper forms to log behavioral issues, often resulting in misplaced or incomplete student records, especially if multiple departments or experts are involved. Other districts simply lack the training and expertise to properly handle all threat assessment cases.

Navigate360 Behavioral Threat & Suicide Case Management software is an all-encompassing violence prevention technology that provides a convenient, comprehensive solution for evaluating incidents early, enhancing threat prevention and improving positive outcomes for students of concern. This suite provides evidence-based assessment, analytics reporting and case management capabilities that make it easier for multidisciplinary teams and experts to work together and stay on the same page.

If warning signs of a student in crisis are missed, behavioral concerns are at risk of escalating into violence to self or others.

Prevent harm to self and others with:

We are proud to be the only company that offers expert training aligned with expert guided case management to help schools create holistic cultures of safety with 360-degree protection for students.

A student struggling with their mental health may express their challenges through disruptive behavior in the classroom. When addressing challenging or concerning behavior, schools need a more effective approach to handling student misconduct in comparison to traditional behavioral intervention discipline models. Traditional discipline and intervention focus on removing behaviorally disruptive students from the classroom. Very seldom do these interventions help students learn from their mistakes.

Navigate360 Intervention & Restorative Practices provides on-demand lessons for students experiencing behavioral challenges and helps them learn the impact of their behaviors. Turning each incident into a learning opportunity is the healthiest and most effective way to address challenging behaviors and reduce recidivism. The intervention curriculum provides schools with an alternative to detention and suspension and supports a positive approach to discipline, keeping students on a successful path with modern and relevant digital lessons mapped to infractions.

Preventing violence should not be the only goal a school sets in order to improve its climate. Actively creating a positive learning environment is crucial to students’ safety and wellbeing. Everyone involved in students’ lives can work together with a focus on social-emotional learning (SEL) and other positive practices to make the school feel like the safe, supportive place students need — and there are numerous ways to make that happen.

Navigate360’s Social-Emotional Learning curriculum offers a comprehensive and robust solution for appropriate character development and positive mental health, social and emotional wellness, behavior intervention, and restorative practices for schools of all sizes. The CASEL-aligned curriculum is scaffolded by grade and provides an on-demand sequenced learning program for students, staff and parents. In addition, the fully customizable platform offers robust resources and lesson plans that are guided and flexible to meet the needs of each school.

Finding the Right Solution for your School

Students can’t reach their full academic potential unless they feel safe and supported at school. Navigate360’s school safety solutions provide you with accessible, integrated and relevant tools necessary to save and enhance lives. From culture to compliance, you can detect, manage and prevent threats to your school’s safety while fostering the mental health and character development of students and staff alike. Learn about our K12 safety solutions here.

Whether you need one or need them all, Navigate360 can meet you where you are. Our integrated and complementary school safety suite makes it easy to design, manage and support solutions customized to meet your specific needs and budget. Explore all of our solution suites: